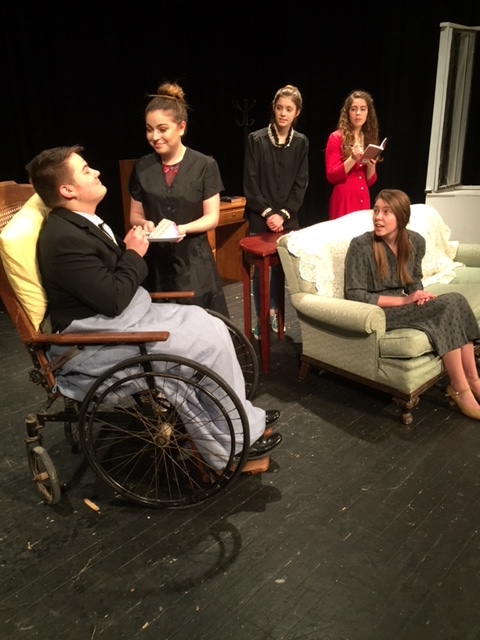 Olympia High School will present the Broadway classic comedy The Man Who Came to Dinner, by George Kaufman and Moss Hart, on Thursday, May 3; Friday, May 4; and Saturday, May 5.  All performances begin at 7:00 PM.   Tickets can be reserved by calling Wendy Wade at the middle school at (309) 379-5941, ext. 8330.

The Man Who Came to Dinner has long been acknowledged as one of the funniest comedies ever written. When a freak accident lands radio personality and theater critic Sheridan Whiteside (Austin Meredith) in a wheelchair, the home of Mr. and Mrs. Ernest Stanley (Matthew Nelson and Grace Melick) is under siege from his extended reign of terror. Hysteria runs rampant as the convalescing curmudgeon, among other things, interferes with the love life of his long suffering secretary Maggie (Hannah Birkey), convinces the Stanley children (Zachary Manahan and Emma Kindred) to defy their parents and run away to pursue their dreams, and tricks theatre star Lorraine Sheldon (Kelsey Schrag) into making a mad dash to Ohio to steal Maggie’s boyfriend Bert (Ethan Schopp).  The plot is neatly wrapped up by a clever deus ex machine at the end.