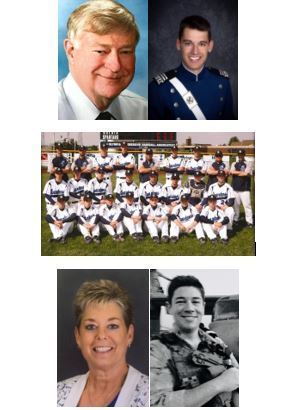 As in tradition, we will be recognizing this year’s inductees at a home boys’ basketball game.  This year’s game is February 16, 2019 vs. Clinton High School.  The introductions will take place at halftime of the Varsity Boys game (approximately at 7:30 p.m. that evening).

The contributions of Mr. Blair started in 1965, when he took a position in the Atlanta School District.  In 1966, Douglas was instrumental in the formation of the Olympia School District.  For the next five years, Mr. Blair spent his time rallying supporters, convincing doubters, fighting naysayers, and in and out of the Supreme Court so that Olympia could come to realization.  Douglas worked closely with the State Board of Education and Illinois State University developing curriculum, courses, and programming that would be innovative, creative, and of higher quality than the wealthiest of city schools. As the first Superintendent of Olympia School District, he was the driving force behind the development of Olympia High School, which opened its doors in August 1972.  The consolidation of eight small communities gave students an opportunity to attend a larger high school.  Olympia High School then had the resources to expose students to a college prep curriculum for the first time in history.  This also made it possible to offer students a greater variety of sports, clubs, and activities.  For the first time Olympia School District had a high school football team, wrestling team, swim team, and multiple levels of baseball and basketball.  The consolidation also benefited extra-curricular activities at the elementary and middle school levels.  Students now had the opportunity to participate in competitive basketball, baseball, and track at the middle school level.  While elementary students could compete in music contests, science fairs, literary festivals, and other special programs.  Douglas dedicated his life to education with over 55 years of service and he made an everlasting impact on students in the Olympia School District.

Tyler Ginger is a 2013 graduate of Olympia High School. While attending Olympia, Tyler participated in a variety of activities.  Some of Tyler’s most notable accomplishments occurred at the IHSA State Track meet: 2011- 2nd place finish in 1A Pole Vault; 2012- 2nd place finish in 2A Pole Vault, qualifier in 110m High Hurdles and 4x200m Relay; 2013- State Champion in 2A Pole Vault and 3rd place finish in 110m High Hurdles.  He also earned Corn Belt All-Conference/ All-Academic Honors as well as seven Corn Belt Conference Titles in four different Track & Field events.  Tyler is a school record holder in the Pole Vault and 110m High Hurdles.  After Tyler graduated at the top of his class, he continued his success in Pole Vault at the United States Air Force Academy.  In 2014, he earned 6th place and, in 2015, he placed 3rd in Pole Vault at the Mountain West Indoor Conference Championship.   Tyler graduated from the United States Air Force Academy in 2017 and he is currently a Financial Management Officer in the United States Air Force.

A 1982 graduate of Olympia High School, Karen (Miller) Graber was involved in numerous activities.  She was a member of Speech Team (Mark Swartz Speech Award; State Finalist), Reader’s Theatre (All District Cast & All Sectional Cast 1981 & 1982; State 1981), Madrigals, Swing Choir, Student Bank Board, Showcase, Musicals (1982 Lead- Hello Dolly), Student Council, Pep Club (President 1982), Speech & Drama Club (President 1982), Spanish Club, Chorus (President 1982), Students Helping Exceptional Students (President 1981 & 1982), and AFS Club.  After high school, Karen attended Illinois State University and received her Bachelors of Art degree in 1986; she earned her Masters Degree in 1993.  She has dedicated her life to the Olympia School District and she has been highly involved in various organizations.  She has been a Featured Speaker at Illinois ASCD Pre-K/Kindergarten Conference (11 years), Ten Year National Presenter for B.E.R., Head Teacher at Olympia West Elementary, SILT Member, K-12 Council, Steering Committee (8 years), Olympia West PTO (officer), Volleyball Coach (McLean/Waynesville-7 years), Speech Team Coach (3 years), and Madrigals Officer.  Karen has also been awarded with the IASCD Diamond Jubilee Outstanding Educational Leader Award, Outstanding Service to Children Award, and she was Nominated for Disney Teacher of the Year.  During Karen’s time as a student at Olympia High School and as a teacher at Olympia West Elementary, she made an everlasting impression on the Olympia School District and she impacted many Olympia graduates along the way.

To repeat as champions in any sport is a feat that requires immense talent, ability, commitment and sometimes a little luck. The 2009 Varsity Baseball Team had just the right combination to duplicate their 2008 IHSA State Baseball Championship.  The Spartans had some hard fought battles during the regular season and on the road to the State Finals.  Their journey to State began with a 4-1 win over Maroa-Forsyth in the Regional Championship.  The Spartans easily defeated Paris 10-0 for Sectional Semi-Finals and Teutopolis 13-2 in the Sectional Championship.   With a 4-3 score, Olympia overpowered Pleasant Plains in the Super Sectionals, which advanced them to the State tournament.  With an 11-0 win over Watseka in the State Semi-Final, the Spartans headed to the State Championship game for the second year in a row.  These young men finished their season with a record of 30-6 overall, beating Edwardsville Metro East Lutheran in the championship game 8-1. Their determination and perseverance took over when it came time to advance, and eventually they achieved back-to-back IHSA State Baseball Championships.